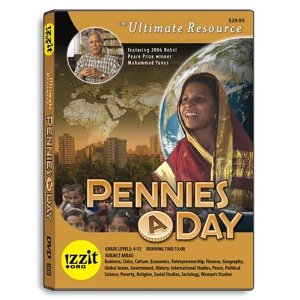 Film Synopsis: Features work of Muhammad Yunus who developed the concept of microcredit. His Grameen Bank gave small loans to millions of villagers in Bangladesh; helping poor women begin businesses and help their family’s poverty. Story is about one family and microcredit’s world wide phenomenon.

I found this story extremely fascinating! It was able to keep my attention throughout the entire film and very easy to understand (grades 4-12). The film is intended to show how one man’s idea of a currency and banking system can have a positive effect on entire villages, communities, and nations. I really didn’t have much previous knowledge over the topics of third world countries or how to even create a banking system, but the film does a wonderful job at explaining the impact this man has on others and how simple it was to create this idea.

Professor Muhammad Yunus travels to his birthplace of Bangladesh and realizes the poverty that has stricken so much of the country. He discovers that for only $27 dollars, he could start a system that would affect the lives of 40 families; these people could start small businesses and, hopefully, escape poverty. The system of microcredit –the lending of very small amounts of money at low interest – was born. Surprisingly, the people who received the credit and were in charge of starting businesses for their families were actually the women. Not only is this system wonderful because it’s helping reduce poverty in third-world countries, but, in these countries especially, it is increasing the role of women, which is amazing.

The simplicity of which the villages use this system makes you wonder why no one else thought of this before, but one thing is for sure, they were in desperate need of this man to come along and improve their way of life. In the recent years, microcredit has begun to be used all over the world and reduce poverty. This DVD documents how Professor Muhammad Yunus and the Grameen Bank are able to positively affect this one family and their entire village.

I recommend that everyone watch this documentary, so they can be as influenced to make a difference as I was.